Over the summer the Trust have surveyed over 300 sites across the Ribble catchment. Our survey team do this to monitor fish numbers, particularly salmon and trout numbers. This helps us to gauge the health of our rivers and look for the areas which are doing well, and the areas which seem to be in poorer health.

This year’s summer has been extraordinarily warm and dry, leading to lower river levels and higher river temperatures. This caused problems both for our team (who are more used to summer rain!), and the catchments resident fish. 67 of our 333 sites had extremely low water levels and a further 6 were completely dry.

Despite this there has been a rise in the number of salmon found in the Ribble and Hodder, with the Hodder yielding the highest numbers of salmon. However, there has been a drop in their overall distribution. This drop has been attributed to the warmer weather, warmer river temperatures, and low water levels.

On the Calder trout appear to be thriving, with numbers doubling compared to last year. This is likely to be a sign of the species recovering following the Boxing Day floods, which decimated fish numbers in the Calder. However, salmon numbers here are still low here. Next year we are planning to survey more sites in this area and carry out further investigations into what could be preventing salmon from spawning here.

It’s not all about salmon and trout. There are many other species that we find and record across the catchment. One notable discovery this year is the number of sites supporting juvenile chub. The fisherman’s favourite has been found at another 20 sites this year! 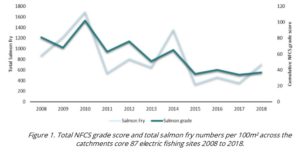 To find out more look out for an extended report in our 2019 newsletter, or our official report which will be uploaded to the Ribble Rivers Trust website soon.